When opportunity meets ability great things can happen.  Let me tell you about a friend's enviable pottery results and the unusual piece I was able to pick up from him the other day.

I admire Todd Pletcher's work.  His forms are fluid, delicate and light.  I enjoy using the small selection of his work that I already own.

Recently Todd assisted Justin Rothshank with a decal workshop at the Arrowmont School of arts and crafts. While at Arrowmont they took advantage of the opportunity to do some soda firing.

I was following Todd's Facebook posts and saw pictures of pieces as they were coming out of the soda kiln.  One special piece grabbed my eye. I mean, it was all good work, but one piece just started calling my name.  I couldn't believe my luck when I visited his studio after his return and saw the piece in person.  Not only was he willing to part with it, rare as it is, but no one else snatched it up before me.  The moment I saw it on his display shelf, I grabbed it up before he could change his mind about parting with it.

Well, no, I did ask if he was sure he could part with it.  He admitted this cup is special.  He doesn't often get to soda fire.  If I had been similarly "gifted" with such a fine souvenir of Arrowmont, it wouldn't be leaving my presence except under armed guard.

I look at this cup Todd made and appreciate it as a fine example of how he fits so much movement and grace into his forms.  But this particular cup is a standout.  It has a delicate, subtle band of decal work crowning the topmost undulating curve.   Todd is a master of teasing decorative effects out of glazes to the amazement of the professionals who formulate them.  Here Todd used his developed aesthetic to create a far more subtle effect with decals than I thought possible.  The band of decals enhances but doesn't define the piece or overwhelm it.

Subtle the decal work may be, but this cup is far from being a poster piece for "Less is More."  Not with this intense, delicious turquoise blue soda glaze.  You just don't get a surface like this from regular atmospheric firings.  This is center-of-the-shelf eye candy. I look at it and realize that this is what happens when a skilled potter gets the opportunity to play with friends.  Professional synergy produces good results.

You can find more of Todd's regular work at his Etsy store. 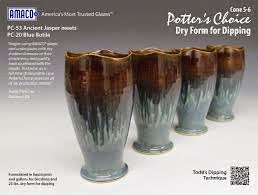 Todd also has a video detailing how he does his glaze layering on Youtube using Amaco's Potter's Choice glazes.
Posted by Unknown at 7:26 PM