Ah, the complex world of soda firing. This cup is by Anthony Millette through the Anthony Millette Ceramics Etsy shop. It's one I looked at and watched over for a while, wondering if it would be as good in the hand as it looked in the photos.

The photos advertised some very juicy wood fire flashing, a shino liner and a hand trimmed foot. The roughness of the thrown form is just about the opposite of what I most often try to do in my own wheel work, yet I definitely connected with the piece and kept coming back to view it. I generally prefer a cup that is taller than it is wide and more purposely finished than this one, so after it drew me back a few times I started to wonder what about it intrigued me so much. I noticed how many views and favorites this cup was accumulating and I started worrying that if I didn't buy it someone else would and I wouldn't be able answer my own question. 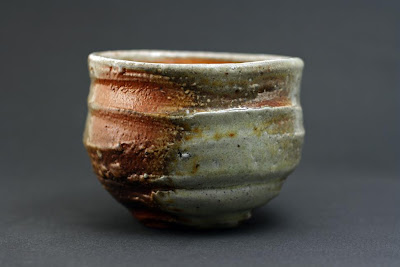 I'm not even really sure how to word the question, but it was something like "how can I be attracted to a cup that has details that I would never try to put into my work," or "am I so interested because I have never given myself permission to express myself in clay this way?"

An important enough, almost visceral question.  So here it is in my hand now.  I have the cup and I find it to be a fascinating and revealing experience to hold it and use it. 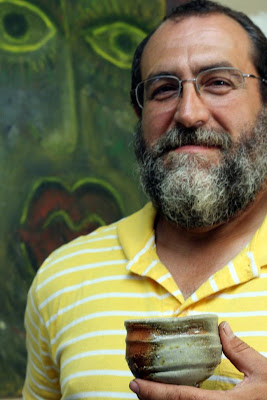 It looks as if it might feel heavy, even clunky like a beginner's wheel work, but the wall thickness is even top to bottom and only thick enough to feel comfortably solid. So the potter really knows what he's doing. He's found a way to capture the slip-surface softness of the moist clay in a finished, fired piece!   The throwing technique that at first seems unrefined reveals itself to be a way of capturing the loose fluidity I feel when I'm forming clay on the wheel.  In a totally "backwards" way, the texture creates the form which creates the cup.

This piece fooled me.  It reminds me of a couple of soda glazed wood fired pieces I own.  I thought for sure it was wood fired, but Anthony tells me it's not.  It's been soda glazed in a gas fired reduction kiln.  It's remarkable how much is happening on the surface of just one cup.  There are gray soapstone smooth areas, atmospheric flashings that show me the flame path and wet orange soda splotches.  The shino liner looks great on the inside underneath a puddle of crackled clear salt glaze that resembles bottle glass.

I enjoy holding this cup, feeling it's weight in the palm of my hand as I sip from it.  It has a varied tactile surface that ranges from the lumpy, quickly thrown clay to a glassy wet glaze to a smooth matte that feels like water-worn stone.  There's a strange and wonderful mixture of sensations to have different fingers touching different surfaces.

Somewhere in this rich enigma of a cup is the answer to my question, but I'm not in a hurry to find it.  I'm finding that I like living with the question, that it adds to the enjoyment of using the cup.  This simple cup is not as simple as it looks.  I think it will teach me a lesson that's best learned over time.   This is a good cup for when I feel restless to move into new, deeper areas, something of a doorway to the unknown.