I enjoy unwinding at the end of a day with a cup that I can contemplate while I sip my drink. I found this cup on Etsy at John Spiteri's shop BlueParrotPots.  It's a good contemplation tumbler, first and foremost because it holds at least 14 ounces.  That gives me more sipping and thinking time than your average yunomi.

It's a pleasure to close my eyes and run my fingers over the outside surface as I turn the cup. I like the tactile quality as the surface textures range from matte to light orange peel. 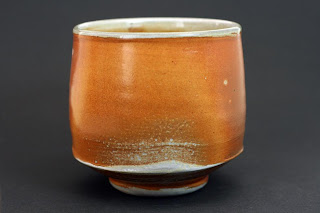 I prefer a cup without a handle.  A handle makes you hold the cup at a distance.  I like to cradle a cup with my whole hand in a more intimate way.  As I hold the voluminous cup in my hands I find I'm grateful that it has a short pedestal foot that doesn't interfere with being able to fully hold and savor the form and outer surface.

A few sips into the contemplation, I'm ready to open my eyes and drink in the visual surface subtleties.  On the outside the colors flow from rust to orange to creamy white in a way that only fire and soda can create.  The flow of color speaks to me of other pieces that sat on the kiln shelf nearby, of flame paths and magical soda vapors.  The shino liner in the cup picked up a golden metallic luster during the soda firing.  As the level of drink goes down, more of that luster is revealed and the depth of the sheen draws my attention further down into the cup. 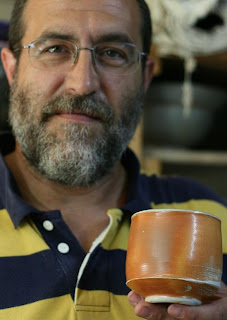 As I finish my drink I marvel at a wonderful finger swirl at the bottom of the interior.  It's almost as if the cup is winking at me knowingly, acknowledging closure to a drink well delivered. 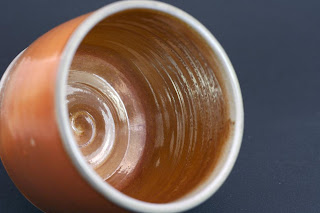 I think as potters we have an ability to take a fellow potter's work and absorb a richer story from it than mere muggles would.  Artists need to make the effort to sit and visit with other artists' work.  Every potter needs a shelf of contemplation mugs.

John has recently listed some attractive new work at his store.  Many of his pieces have handles.  I still haven't gotten around to contemplating handles, but I know they have a lot to say to those who are listening.  Take a look at Johns work and give him a shout. I know he would like to hear from you.
Posted by Unknown at 10:52 AM